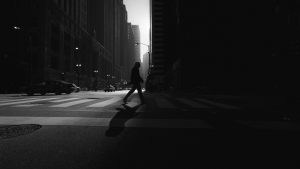 “Love is an action, never simply a feeling.” bell hooks

Earlier this week, I led a virtual discussion from my home in Minneapolis.

The topic, which was set back in March, was Embracing Discomfort. The day of the event, the host and I agreed that it still felt like the right topic, and maybe even more so, given the events unfolding in our beloved city in response to the murder of George Floyd by a police officer.

In this event, I talked about how, in America specifically, we are conditioned from a young age against experiencing, talking about, or expressing discomfort. I pointed out how we are given a plethora of “quick fixes”— products, quotes, excuses—to defend against feelings of discomfort.

I shared how so much of what we believe is held unconsciously, and that many of our beliefs were hard-wired into us from a young age through cultural conditioning. And that this includes, for white people, unconscious (and conscious) racist beliefs.

By this, I mean that these racist beliefs, and the associated behaviors, organizations, laws, and systems, did not get always handed down directly through words, but rather more subtly through examples found in our own lives, in the media, in our entertainment. In other words, the collective consciousness shapes us, throughout our lifetime, to align with the beliefs held by the culture at large; that is, the culture in power.

It is the collective consciousness that Daniel Quinn is referring to in his book Ishmael, when he writes: “The mythology of your culture hums in your ears so constantly that no one pays the slightest bit of attention to it.” At some point, we don’t even know it’s happening. Maybe we never have. Maybe the entire lot of our beliefs are simply hand-me-downs that have gone unexamined for our entire lives. And yet, there they sit, driving our behavior, shaping our worldview, making us repeat the same mistakes, and causing the same pain, again and again.

Implicit and unconscious biases aren’t necessarily always our fault, I said, but they are our responsibility.

During the check-in that followed, one participant mentioned that, while I was talking, they got a notification from their phone app. Apparently, their heart rate had increased considerably during the talk.

But the workshop was about embracing discomfort. And now, my own teachings boomeranged back to me, asking me to examine my beliefs about what a spiritual teacher “should” and “should not” do.

And yet, we spiritual practitioners crave the light. We always have. It’s likely what drew us to these practices in the first place.

And there’s certainly nothing wrong with seeking the light; at least, not in and of itself. But right now, I’m seeing too many spiritual leaders—white spiritual leaders, to be precise— using their powerful platforms in the same way they’ve always used them. Such as these phrases that came across my social media lately:

I know now where my thoughts and beliefs about the role of spiritual teachers came from. They came from teachings like the above—recycled, reissued, reused in every single crisis.

I never took a vow professing my love for and commitment to the light. I didn’t sign an agreement that, as a spiritual teacher, I would always exude and cultivate calming, relaxing energy. I’ve just believed it to be true that that was my job. I adopted the beliefs, largely unconsciously, and then the behaviors followed. Not unlike how Amy Cooper never had to be told to believe that her relationship with the police was on a whole different plane than a black man’s relationship with the police. She just knew. And the behaviors—her tone of voice, her words—followed.

The world is crying out for us all change. For us all to examine our long-held beliefs, no matter how hard-set or time-worn. And not just the surface beliefs, but the ones that have run rampant and unconscious within us. This “us” does not exempt spiritual teachers and practitioners. Our feet are being held to the fire, too. We do not get to escape to the light.

What might our role as spiritual teachers/practitioners be in this new world?
It’s anyone’s guess, but perhaps it will no longer include being complicit in helping people bypass, cover up, or temporarily forget pain.

Spiritual bypassing is a real thing that must be called out and rejected.

Maybe in this new world, we will stop thinking of ourselves and each other as fragile and sensitive. Perhaps we will stop saying things like, “I can’t watch that video, it hurts my heart”, or using our new-found status as an empath to avoid feeling deeply. Maybe instead, in this new world, we start believing in and fostering tenacity, courage, and resilience of human beings. Maybe we challenge, rather than comfort. Question, rather than accept. Create, rather than regurgitate.

I don’t know much about the new world, but I do know that we will need a new kind of human being, and particularly, a new kind of awake spiritual being. But right now, in a world that is on fire in so many ways, the old language of love and light is nothing more than spiritual bypassing.

Here’s what else it is: dismissive. It’s superior. It’s escapism. After all, how many people really have the opportunity to withdraw into the light right now? Not George Floyd’s family, that’s for sure. So, nor should we. Love and light language right now is also detached, passive, arrogant, and condescending.

The light that we’ve coveted and chased and desired is blinding us.

Can we not see that “be the light” teachings, especially right now, are an example of spiritual privilege, which is just as damaging as white privilege?

It’s uncomfortable to lead people into darkness and discomfort. It’s against the unspoken rules to leave people more uncomfortable when they leave your page/event/class than when they came in.

In order for a body to heal, the entire body needs to get involved. Some parts cannot escape and expect the other parts to carry the whole burden alone. Our legs don’t get to go for our run on their own if our back is in pain. Black people are not responsible for carrying the burden of racism and white supremacy. They did not create these things. White people did. We must face it.

Spiritual teachers and practitioners—it’s time for us to go into the darkness.

The term “darkness”, by the way, does not equate to “evil.” It means confusion and instability. It means mystery, possibility, and imagination. It means many things that our current world—the old world—rejects:

The darkness has as much to teach us as the light, and perhaps more right now.

But to enter, we must release the tools of the old world. The old mantras, the old habits, the old routines and teachings won’t work where we’re going. We are going to have to find new ones.

Better ones. Stronger ones. Ones we get from each other, not from spiritual texts.

For once, maybe we’re not supposed to regain our stability. Not yet, anyway. We’re supposed to be off balance, off kilter, confused, saddened, angry, overwhelmed.

Maybe we’re supposed to be knocked off our feet and stay down there for a while. Maybe we’re not supposed to pick ourselves back up yet.There is a time for clarity, calm, understanding, and comfort. And there is a time for confusion, chaos, seeking, and discomfort. We are in the latter time. And the sooner we accept that, the sooner we can create the new world we all say we want.

As a spiritual teacher and practitioner, I recognize that it is time to change my beliefs. I believe that my definition of what it is to be spiritual needs to adapt to include making people’s hearts race.

Because I believe that our hearts are stronger than we give ourselves credit for.
I believe that we are not the sensitive creatures we’ve let ourselves believe, which has turned us away from difficult topics so many times before.

I believe that this is not the time to right ourselves. That it’s okay if we break apart.
I believe breaking down is good for us, because in doing so, we also break open.
I believe leadership is not always about being in front, but sometimes remaining behind or alongside.

I believe that compassion and empathy demand softer hearts melted through pain, trial, and discomfort of all kinds.

So fuck the light for a while. It will always be there. It’ll wait for us, even.

For right now, though, it’s time we walk into the darkness.

No justice, no peace.