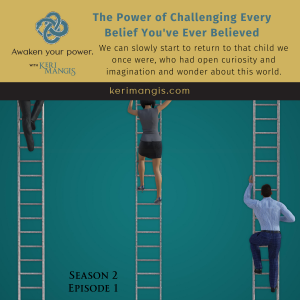 7:00 Intro to This Episode: The Power of Ignoring every Truth you’ve ever Learned.

“We all come into this world very innocent, very curious, very open to ideas and explorations and possibility and imagination. This is really what makes a child a child. Then, we start to learn and we start to gain information and adults tell us certain things about how the way the world works. And we take their word as gospel as the truth. We begin to internalize what they teach us, and they become our beliefs.

The longer we’ve held a belief, the more permanent and glued in it is to us and the less likely it is to change as we get older until something really comes along and knocks it loose. And then that can be a very traumatic experience. If you’ve ever had a belief that you really cherish and then it got broken down.

“We can start chipping away at them ourselves, to see what they’re made of to see what value they have for us to see if they’re just something we’re carrying around because our parents carried it and their parents carried it and back and back it goes. The power of ignoring everything you’ve ever known or believed to be true, is really about accepting that it’s possible that nothing we’ve ever been told, nothing that we believe is true. This is really what spiritual practice is, to me. It is the willingness and the practice of knocking loose the things that we think are true to see what they’re made of. To question them to turn them upside down, I get this image of rocks in the palm of my hand, each one standing for a belief. And we just turn them around and around in our palm and we start to see them from different angles and different sides. And maybe we taste them, maybe we smell them, maybe we put them under different kinds of light. We won’t know if they’re valuable for us or helpful for us. If we just simply carry them on year after year after year. Most of what we believe to be true has come through cultural conditioning. This is the job of a society to keep a population of people believing a similar story.”

“Unless we were hanging our own identity on this belief on that belief, we can only grow we can only become better human beings [by challenging them.]

Then the beliefs we pass on unconsciously or consciously will be healthier. will be more complete will be more true than before. I think of beliefs, I see them like a ladder, we started building our ladder when we were really young. So again, as children, we didn’t have these beliefs we didn’t know certain things about how the way the world works and who’s in charge and who’s not and who has power and who doesn’t and, and who gets to speak and who gets a turn at the table and who doesn’t and when these things happen, but as we grow older, we have experiences that teach us certain things about the hierarchy in the world.

And these experiences are like rungs of a ladder. And the older we get, the more wrongs our ladder has. And if we’re never doing any self reflection, that ladder just keeps getting more and more stabilized. We just keep reading content and being around people that just fortify our ladder. And now we’re hanging on to our belief ladder for dear life. Your life because this is our platform. This is our identity we have merged with our ladder. beliefs, we’re probably never supposed to do this.”

I think we all know intuitively how attached we are to our ladders of belief. And we’re going to protect them at all costs, even if it means that pretty soon no more rungs can be added to this ladder because it is so completely fortified and unified as one, so there’s just simply no room for anything else to be added on. And there’s no possibility for anything to be removed.

“What if we begin at the beginning, if we begin with maybe nothing I’ve ever been told is true, then the possibility is that we can start to deconstruct some of the ladder that we’ve been attached to, we can start freeing ourselves up to explore other places and opportunities and ideas and creativity we can slowly start to return, at least in our mind, to that child, we once were, that has that open curiosity and imagination and wonder about this world.

“I don’t want to say like this vulnerability or naïveté. There’s there’s a wisdom, of course, in adults that children don’t have. So there’s always going to be some things that might just, you know, bounce right off. But what if we all had a little softening of our beliefs? What if we all just said to ourselves, you know, it’s possible, it’s possible that I’m wrong. What if we allowed this kind of humility to move into our lives?”

Award-Winning Author & Wholeness AdvocateCheck out my interview in The Edge magazine!Founder: KeriMangis.comAuthor: Embodying Soul: A Return to Wholeness—A Memoir of New Beginnings, winner of the 2020 IPA for Body, Mind and Spirit