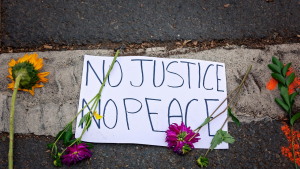 You hear it too, right? The sweet, sweet sound of normal calling us?

Or, if you don’t hear it, can you feel it? The pull to shore up the societal guardrails, hide the mess, and pretend we’re done with the work we needed to do?

Brush the dust from our hands and return to our previously scheduled programming?

We’re tired, after all, and normal promises us respite. We’re exhausted. The Universe has knocked us to our knees twice in the last six months—first with the coronavirus clearly. Next, with the continuing protests and riots in the wake of horrific but, as we are learning, all-too-frequent occurrences of police officers killing Black people in the streets, their cars, their homes.

In normal land, white people pretend slavery ended over a hundred years ago. And global climate change is not our responsibility, but that of some generation far, far away.

Back in normal land, coronavirus is, for all intents and purposes, over. “Isn’t that nicer to believe?” normal whispers.

I hear normal calling and, like the tired, stressed, confused nation we are, I hear us all scrambling to get back into those arms.

But we’ve been knocked down for a reason: we’ve really f*cked things up in America.

I don’t just mean the failure to provide widespread testing, treatment, and protective protocols for a global pandemic the likes of which we haven’t seen since HIV/AIDS.

I don’t only mean the fact that the outdated electoral college ensured us a fascist, sexist, authoritarian of a president who is consolidating power and silencing dissent at an alarming rate.

I’m not speaking only of the collective mindset that continues to work from the premise of white supremacy and thus creates attitudes and resulting actions that continue to oppress women, LGBTQ folk, and people of color.

I’m not talking only about a world where we’re rightly celebrating that members of the LGBTQ community can no longer be legally fired for simply being who they are. I’m talking about the world we built, in which this wasn’t resolved decades ago, a world in which it cannot go unnoticed that three Supreme Court judges dissented.

I’m talking about all of it. And so much more.

And like a child sent to their room for bad behavior, we should probably not get back up until collectively, we understand where we’ve gone wrong, promise to make amends, and truly intend to do better. To be better.

I mean really, if the Universe has knocked us down twice in six months, we ought to consider that there’s something significant about that.

In my well-practiced mom voice, let me say that we had better think long and hard about whether we’re proud of the world we’ve created.

Normal is calling to us, but not because normal was better.

In truth, normal was horrible. And we know it. Normal, in the words of Roxane Gay“is the very thing from which we [Black people] yearn to be free.”

Therefore, in a way, wanting normal back is an easy giveaway of our privilege—be it of sex, race, sexual orientation, or all of the above; only people who were benefiting from normal would want to return to it. In the same way that Trump and his supporters romanticize some previous version of America, we are merely romanticizing normal.

Yet, normal calls us back like an abusive spouse, saying all the right things about how lessons have been learned and this time, things will be different.

No, wait…we are not the victims here. We are the abusers.

We are the ones destroying the planet, hurting and hating each other, limiting ourselves.

Normal is the addiction that tells us we’re not really bad people, and promises us just one drag/drink will soothe our rattled nerves. It wasn’t us, anyway; it was them. Antifa. White supremacists. Out-of-towners. The radical left. Looters. Protestors. Trump. Barr. Nancy Pelosi. Them, not us. Not ever us.

“Oh, no worries,” Normal reassures us, “there are no mirrors here in normal land. You don’t need to look at yourself. It’s too painful. Now, put on a smile, because there’s a new comedy on tonight that I know you’ll love.”

“Oh,” Normal continues when we hesitate, “but think of how good it would feel to go to summer baseball games, to sit in a restaurant’s crowded comfort, or to not have to turn around and go home because we’ve forgotten our mask when Costco demands we wear one. Imagine not having to take a detour because a protest is blocking your route!”

And the offer is so tempting, because we’re tired, confused, anxious, disappointed, and frustrated.

Yet, we forget that this ship we have created keeps sinking. We’re blaming everything including the water itself, when it’s our ship—our culture—that’s the problem.

It doesn’t sail right. It doesn’t distribute weight properly. On this ship, the wealthy and privileged sit in the front, and the rest of us sit in the back. So, we keep sinking.

A new ship won’t help if we don’t change the seating arrangements. No, wait, the seats themselves. No, more than that. We must entirely re-envision what it means to sail on the water—all of us together—in a way that keeps us all above water. That distributes resources fairly.

Heck, maybe it won’t even be ship! But if we rush to get the old ship back out to sea, we won’t go through the difficult yet rewarding questioning we need to do right now.

I can’t imagine how whiny the demands for haircuts must’ve sounded to people of color who have had to deal with their hair care products being kept under lock and key. Did you know this was happening? I didn’t, until just recently when Walgreens and CVS announced they will no longer continue this practice. I didn’t know about this, because normal protected me from seeing it.

But while we’re talking about freeing black hair care products from locked cases, can we also discuss freeing women’s hygiene products, and making them cheaper (or free) and more accessible to women all over the globe? Can we also talk about freeing up access to and affordability of birth control for women, in the same vein as men’s virility and erectile disfunction medication? How about increases in pay for those we have discovered are the essential workers of our society?

There’s an incredible amount of work to do. We must keep going, and pushing, and insisting on change now, while we’re here, rather than getting up and then daring the Universe to knock us down a third time. Three strikes and we’re out—I’m pretty sure that’s not only a baseball reference.

Because if we return to normal, our momentum will slip. If we let normal return, people in power will relax, but right now they are on guard, making decisions that align with a better future. It’s not even necessarily true that they want to be making these changes, but they’re doing so because the hot iron of the people’s will is pressing on them.

We can’t let that iron cool. If we give in to our desire for normal, the changes we’ve made might slowly be whittled away when we’re once again stuck in back-to-back meetings.

We all know “normal” wasn’t working. Normal destroyed wildlife and our ecosystem without a care. Normal made little to no space for diversity in its politics, entertainment, businesses, schools, or neighborhoods. Normal gave people leeway to call a police officer a “bad apple” rather than recognizing that the culture of policing is merely an extension of our society as a whole. Lest we forget, police officers grow up in American schools, patronize American businesses, read American newspapers. There are no individual anomalies, and no amount of picking them out like bad apples will solve the problem.

Jon Stewart said it best in a recent interview: “The police are a reflection of a society. They’re not a rogue alien organization that came down to torment the black community. They’re enforcing segregation.”

So, “getting back to normal” right now is just another way of saying we want to bypass the pain of addressing our failures. And yet address our failures we must, as it is the only way we can begin again.

Now is not the time to return to normal. Now is the time to double down on our efforts for change—both those that move outward in the form of letter writing, protesting, or donating, but equally in inward forms of reflection, curiosity, imagination, and meditation.

We can’t just do our way to a new world. We must be a new way.

Underneath the monotonous sound of normal calling, there is another sound.

That is the sound of creation.

It’s a little quieter than the sound of normal. Its pull a little weaker. At least right now. But the more of us who tune into it, the louder it will get, which will call more and more people to it.

This is where we must go, back to the mouth of creation. Back to the beginning. Back to the place where imagination and creativity thrive.

As a practical example of someone who is answering the call of creation, rather than the call of normal, take a look at what Kamala Harris, in a recent interview on “The View,” said when asked about defunding the police:

Harris is not calling for shiny new planks to repair our ship. She recognizes that the ship has failed us. She’s courageous enough to ask the questions that need to be asked if we are going to create a fairer world. She doesn’t want normal; she’s demanding better.

Can we find similar courage to ask questions like this about every aspect of society? Or, will we simply decide that we’ve had enough, and slowly fall back into the lull of normal routines?

The choices we make now, as individuals, will either catapult us into a new global consciousness, or return us to the inevitable repetition of history that we call “normal.”