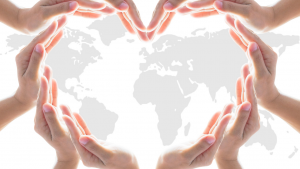 Four years ago, right before the election, I wrote a blog post entitled, On the Precipice: Trump, Clinton and the Election of 2016.

When I wrote it, my hands were shaking with nervous anticipation. I was not someone who believed Clinton had it in the bag. I had driven enough around my own state of Minnesota and the neighboring states of North Dakota and Wisconsin to see something very different taking shape.

I won’t rehash the article here, but the purpose of the article was to persuade any last minute undecided voters or, more truly, any potential non-voters, that this election could really go to Donald Trump. And the thought of that frightened me to my core. Many of the things I wrote about then as fears have come to pass. Some have not—yet.

At the same time, we have seen a groundswell of activism in our country, and an awakening to our duties as citizens that inspired me to do much of the same.

This awakening sent me down an incredible rabbit hole of learning and growing and transforming—adding to my knowledge of history and culture in a way and with a purpose I never felt before.

For instance, in the wake of the Women’s March of 2017, I became inspired to learn the deeper feminist history of our country through books such as F-Bomb: Dispatches from the War on Feminism, by Lauren McKeon, Women and Madness by Philis Chesler, and Good and Mad: The Revolutionary Power of Women’s Anger, by Rebecca Traister. This reading has inspired me to deepen my commitment to feminism by understanding the movement better while simultaneously more fully embracing my own power in being a woman (and my own rage, too).

As the role of racism in the election of Donald Trump became more clear to me, I read books by Toni Morrison, as well as White Fragility: Why It’s So Hard for White People to Talk About Racism, by Robin DiAngelo, and Between the World and Me, by Ta-Nahesi Coates. I also attended a workshop, led by two people of color, which greatly helped me understand the embedded history of racism in America, its sneaky perpetuation, and my own role in it. All of which, I hope, has made me a more informed ally.

I found myself for the first time in my life quite interested in the establishment of the electoral college, which is why I now believe it is completely outdated. I studied and read many non-fiction books by people I admire—Michelle Obama, Bob Woodward, Melinda Gates, and Valerie Jarrett—as well as by people I believe more suspect, such as Michael Cohen. It has all helped me maintain a larger perspective on people and politics.

And, I began researching American history. Not the white-washed and swashbuckling American history we learned in school, but the actual American history, by reading books such American Rule: How a Nation Conquered the World but Failed its People, by Jared Yates Sexton, and The View from Flyover Country: Dispatches from the Forgotten America, by Sarah Kenzior. I never enjoyed history in school, but that is because it was always written in a way that made me feel very separate from it—they, not we. Them, not us.

All this, and so much more. I have truly undergone a transformation. And though much of my research has led me to anger, hopelessness, despair, and frustration, I also feel so much more a part of this country than I ever have before. Which has made me that much more invested in the path we choose next.

Unlike my last essay, when my hands were shaking, this time my hands are steady. Because here is what I know: one way or another, after this election, we have reconciliation to do—on many fronts.

One way or another, we still have a planet that is looking to us to change our ways, reduce our dependency on non-renewable sources, and reject our unsustainable way of life.

One way or another, we have family, friends, and even pets who will need us for support, encouragement, advice, or just our presence.

One way or another, we must work to find more equality for everyone, regardless of class, sex, race, sexual identity, or anything else, in regards to pay, opportunity, treatment by law enforcement, and every other facet of daily life.

One way or another, we must demand higher minimum wages so that nobody has to work two jobs just to make ends meet. If CEOs can pocket millions of dollars in bonuses each year, we can certainly afford to bump up the minimum wage across the board. When people make enough money to eat and provide shelter for their family, crime goes down, neighborhoods are safer, and people are more satisfied and fulfilled.

One way or another, we must ensure that corporations and the wealthiest among us pay their fair share of taxes, which help pay for infrastructure, police, fire, schools, medicare, and more.

One way or another, we’ve got to fight for everyone to have affordable and accessible healthcare, regardless of income, pre-existing conditions, or any other factor. It’s not socialism to put policy in place to ensure that when people get sick, it does not push them into a financial hardship or worse, bankruptcy.

One way or another, we must reunite the children who have been separated from their parents at the border. This is the biggest stain on this presidency and it will never wash out. These children, and their parents, will struggle their whole lives with the trauma of being victims of state-sanctioned kidnapping.

One way or another, we must make our government and its representatives accountable to the people, not to corporations and special interests.

One way or another, we’ve got a fight on our hands regarding a woman’s right to choose, to accessible, safe, and affordable birth control, and to choosing when and how she gives birth. No one, absolutely no one, is anti-life. That’s ridiculous. We are all pro-life. It’s just a matter of who we think gets the final stay of what happens to a woman in the most intimate, and sometimes life-threatening, times of her life—the woman along with her doctor? or politicians, many of whom have some very antiquated ideas of how a woman’s body works.

One way or another, we must close the school-to-prison pipeline which disproportionally hurts black families, as well as reduce recidivism rates by providing opportunities for growth, healing, and acceptance as people move back into society. We must create a society of belonging, not one of exclusion, and help people walk through the more difficult transitions.

One way or another, we must decriminalize marijuana, and yank out the last remnants of the war on drugs out of the criminal justice system. Drug addiction must be reclassified as a mental health issue, not a criminal one.

Donald Trump has caused this country much pain. I know his supporters don’t see it that way, but no one can deny that the fear and anger in our country is much greater now than it ever was before. The last election did not require shop owners to feel the need to board up the night before, or for cities to brace for the worst.

In addiction, he has signaled the all-clear to neo-nazis, white nationalists, and other far-right (and armed) movements that the FBI tell us is the most dangerous movement in our country right now. He has awakened the energy of hate for those who look differently, worship differently, dress differently. So, one way or another, we must find the power of love and compassion once again, for these energies are far more powerful than hate.

One way or another, we’re done with the constant fighting, the lack of civility, the loss of norms, the lawlessness and corruption of an unrestrained president as well as the unfettered grift of his family and inner circles.

One way or another, we have a dangerous virus to contend with, one that is keeping us from living our lives closer together. We miss our loved ones, our sporting and entertainment events. No one is enjoying this, and few (except Amazon) are making money on this. It is crucial that we develop a national plan—one that will stop the virus from further spread, track the spread that is already happening, restore health to those already infected, and maintain health to the rest of society. This cannot be done in piecemeal. One way or another, we’re going to have to get a strategy place that can work.

One way or another, we Americans must reconcile. The deep divide in our country cannot stand. It is not healthy for anyone, and our country is at a breaking point. There is middle ground in between us, and we must walk toward each other. I know this is possible, because I have never engaged in a conversation with someone (except for on social media, where too often civility is absent) where I haven’t been able to find some points of commonality. Nuance gets pushed out in favor of extremism in a hyper-political, highly polarized environment. One way or another, we must reject this.

I do not fear the worst for our country right now. Not like I did four years ago. Instead, I feel hope.

Rather than visualizing us on a precipice of falling into an abyss as I did last time, I see us on the precipice of making a huge step back toward each other, back toward civility, back toward norms, precedent, science, and common sense. I don’t deny that there might be more division before that happens, but I do think the reunion is on the way. Mostly, just because we cannot keep going like this. Human beings are interconnected, just like a human body. We need each other.