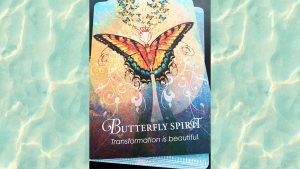 Did you know that there is a stage in the transformation of a caterpillar to a butterfly, inside the chrysalis, in which it dissolves into nothing but a liquid mass?

What was once a caterpillar is no longer distinguishable from a bowl of pea soup. But what will emerge is something beyond the ability of a caterpillar to even imagine.

What innate courage a caterpillar has to enter that chrysalis at all. What a precise sense of timing it has about its own evolution, too, and what blind trust in has in its destiny.

What a role model for us today.

Caterpillars know, on some level of their awareness, that they are here for something more than crawling along the earth (no offense to the earthworm).

But what about humans? What is our destiny? What are we here for?

Perhaps every generation believes their time to be a transformative one, but I believe those of us alive today find ourselves in a uniquely difficult time in human history.

We’re mired in numerous challenging, seemingly insurmountable problems: the Coronavirus pandemic, political discord and the ongoing threat of fascism, the rising number of hate groups and their emboldened members.

Vaccines may slowly be circulating in the population, but for a good number of us, our place in line is way, way in the back. And with the emergence of COVID-19 variants, well, no one can be sure the current vaccines will be effective for the long term anyway.

Most of our children are still studying from their bedrooms, and it’s not quite the adventure it was a year ago to work from home in our pajamas.

Every second of every day, it seems, we’re bombarded by more news than we can possibly discern, digest, and integrate. Human beings simply do not evolve at the speed of smartphones.

“Normal” still tugs at us, often thanks to Facebook which gifts us pictures that now seem from an entirely different time, maybe even from a different planet.

COVID-fatigue is a real malady that everyone I know is suffering from in one way or another. We’re dizzy from taking turns picking each other up from our facedown positions.

And how could we forget that all of this upheaval is happening under the increasing threat of climate change, moving toward its inevitable conclusion.

There is too much to mourn, too much to try and hold. Gentleness is key, now more than ever.

Some people use the metaphor of a marathon to describe this time we’re in right now, but at least for a marathon, the finish line is fixed in place. You can count down the miles. But what are we supposed to do with a crisis with no visible end in sight?

Others use the war metaphor, in which the Coronavirus is a dangerous enemy that seeks to destroy us. Westerners particularly are quite adept in the language and metaphors of war: We “fight battles”, “gather arms”, “sharpen our swords”, and we call people “heroes”, “warriors”, “troopers”, and “soldiers.”

We are culturally conditioned to believe the only way out of a crisis, any crisis, is to go to war with it: President Clinton’s War on Drugs, as just one example, proved what a disastrous approach this is.

We pride ourselves on endurance and stamina. We’ve been dutifully taught skills to hide signs of weakness, fear, or uncertainty.

Surrender, in war language, is never an option.

But we had better start considering it, because the Trickster is demanding nothing less than our full and total surrender.

The Trickster (or the Devil in the Tarot deck), is an archetype. Archetypes are universally-understood energy patterns that speak to very specific behavior or personality types. For some common examples, we all know the energies we speak of when we hear the terms Good Mother, Orphan, Victim, or Bully.

The Trickster happens to also be a master shapeshifter, and is currently manifesting as a global catastrophe made out of particles that, if collected and combined, would fit into a Coke can with room to spare. I’m talking, of course, about the Coronavirus.

The Trickster abhors the status quo, laughs in the face of authority, and challenges expectations, dreams, and plans. The saying, “Make plans and God laughs” has likely more to do with the Trickster than with God.

The Trickster has but one job: to demand our full attention by disrupting our routines and sense of normalcy in whatever way he can, from internet outages at just the wrong time to accidental cat filters on our Zoom screen. But we need only look at the death toll from this pandemic to understand that the Trickster can also be deadly serious.

Heading into year two of this pandemic, we’re wearing down and wearing out. Meanwhile the Trickster—Coronavirus—is busily shapeshifting into new and more transmittable versions of itself.

Like Hercules fighting Hydra, we might successfully cut off one head of the dragon here or there, but two new heads grow back in its place. We don’t have any more “fresh soldiers” to move to the front lines. Our hero tactics aren’t working, and neither is our war language. We’ll never be as powerful, as enduring, or as clever.

The Trickster will leave us only when its message has been delivered into each of our hands. And right now, the message is that it’s time we transform our lives and our way of life on this Earth. No amount of pretending at it will do. No bargains will be accepted.

We need to regroup and reconsider our situation in light of this truth.

We need radical change, from our daily language to our social paradigms.

This might frighten our ego, but it thrills our soul.

Transformation is what we’re here for. It’s our destiny. And like a caterpillar, we know it, somewhere deep inside.

The wheel of life—creation, preservation, destruction, and renewal—will continue to turn, with us or without us. We’re clearly in the destruction, or Kali Yuga, part of the cycle— a time marked by uncertainty, lack of clarity, and all the dangers of the unknown.

An opportune time for the Trickster.

No one is faulted for wishing we could skip this stage. But trying to stop the wheel of life will only result in turning us into stale, frozen, useless remnants from an old time—a Tin Man, holding up a weapon we thought would save us.

Besides, none among us would argue that the pre-COVID world was working just fine, right? There’s only so many times we could try to recalibrate and adjust to some new, fresh horror—more human exploitation, larger economic disparity, police killing more Black people and getting away with it, the death of species at unfathomable rates.

The old world needed to end, and I don’t mean the end times as understood in Christianity, but rather an ending that marks a new renewal, a beginning as certain as trees bud in the spring.

When faced with the Trickster, the best course of action is to take a long, slow inhale, followed by an equally long exhale. Then, look the Trickster in the eye and receive the message intended for us.

No one yet knows what a new world might look like. But I’m sure that it will demand more vulnerability, which means our old, protective personas can’t come along. The new world will demand we live in the moment and become more pliable, so our comfortable habits and routines must go. And the new world will be built on trust and authenticity, so any false relationships need to fall away.

Fingertip by fingertip, let go, and surrender yourself to the changing flow and cycle of life. Even with these initial steps, I promise—you will start to sleep sounder, emotions will move with more ease through your body, and from there, the remaining resistance will fall away like old clothing. We’ll enter our chrysalis. Melt into liquid.

Then one day, maybe before we know it, something glorious will emerge from that liquid.

I’m here for that. I believe we all are.